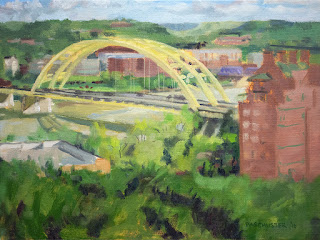 Called "Big Mac" for it's distinctive double golden arches, the I-475 bridge is actually named  for Daniel Carter Beard, the founder of the Boy Scouts of America. Dan Beard was born in Cincinnati and lived across the river in Covington, Kentucky, where he learned and became fascinated with tales of the pioneers and settlers of the area. Writing and illustration work lead to the stories, lore and artwork incorporated into the first Boy Scout handbooks.
Posted by DA Schuster Fine Art at 5:04 PM