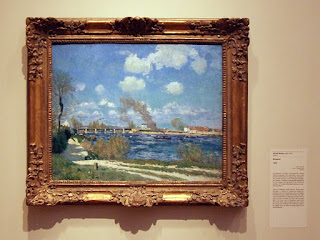 This is the painting I chose to copy on a trip to the Cincinnati Art Museum last Saturday, January 21st, with the Ohio Plein Air group. They have "Paint Ins" each winter in the art museums in the state to avoid bad weather. I worked on:  Bougival, Alfred Sisley, 1876.


Here's the original with ID tag. 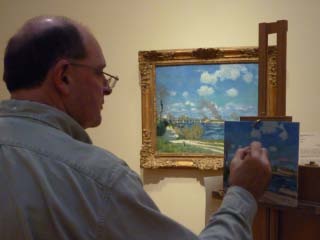 Me working on my little 8x10. It was tough getting the sense of this painting pared down to such a small size. Photo courtesy of Nancy Achberger.

After four hours work, this is where the canvas was when we packed up for home. 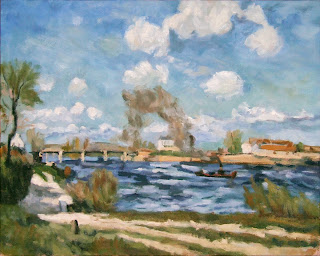 I worked on it again, from the photos I took at the museum, at MAPs group on Monday. This is the completed painting with about an additional three and a half hours.
Posted by DA Schuster Fine Art at 4:42 PM 1 comment: 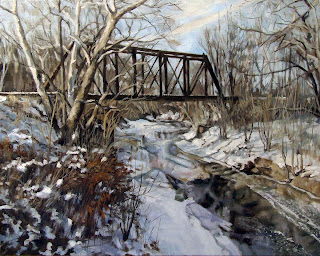 We've had a lack of snow to paint, so far, this year. This painting, Turtle Creek Trestle– Winter, 16x20, oil on canvas, is based on photos taken in December of 2010.

A 1920's vintage trestle that is still in use on the Indiana & Ohio Railway line between Mason and Lebanon, Ohio. Originally built by the Cincinnati, Lebanon & Northern Railroad during the 1880's, this route was controlled, then acquired by the Pennsylvania RR, until selling it to I&ORY in the 1980's. The Turtle Creek Scenic Railway out of Lebanon currently operates day trips over this line.
Posted by DA Schuster Fine Art at 12:26 PM No comments: 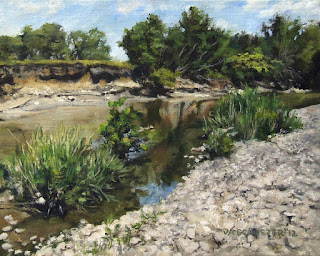 Just completed study for the eighth in the Gregory Creek Series. Still deciding on sizes for the full scale paintings, but they will probably be 16x20's. I worked on this study over several of the Mason Area Painter's sessions and touched it up yesterday. I now have two of these 8x10's that can be framed as a pair.
Posted by DA Schuster Fine Art at 3:33 PM No comments: