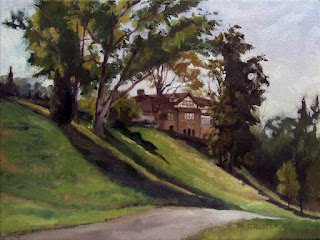 Last Thursday the SWOPA group went to Glenwood Gardens, one of the Hamilton County Park System's parks. The original owners of the land were captivated by the Cotswolds region in England and set out to reproduce the setting here in Southwest Ohio. Their "cottage" is perched on the hill overlooking a valley of rolling fields and stands of large trees. I started painting early in the morning and fixed the scene with the long shadows being cast down the hill.
Posted by DA Schuster Fine Art at 7:04 PM 1 comment: 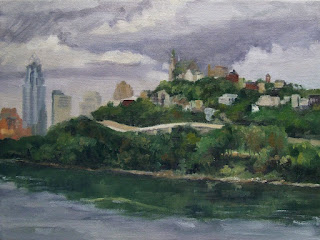 A dramatic sky and the first hints of Fall touching the trees on Mount Adams was in view from Bellevue, Kentucky last Thursday. Southwest Ohio Plein Air painters met in Bellevue Beach Park, but I wound up painting next door with the kind permission of the custodian at the VFW Hall. This gave me a slightly better angle of Mt. Adams hill and the city behind.
Posted by DA Schuster Fine Art at 12:38 PM No comments:

House of the Singing Winds 2 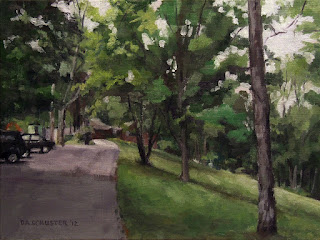 While painting the third 16" x 20" work in the House of the Singing Winds Series, I did this 9x12 at painting group. Showing part of the parking lot and the approaches to the TC Steele house, you can get an idea of the ridge top setting for his home. 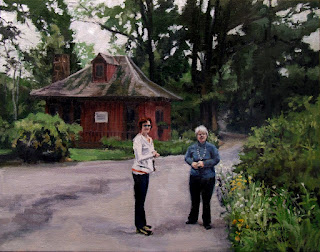 My wife and I were greeted by the home's currator and given a tour of the facilities. In the background of this painting you get the almost opposite view of the drive from On the Grounds 2. Behind the figures is the building Steele built as his second studio at the site, his first studio being the living room area in the main house. The indoor studio spaces were not much used, Steele being devoted to painting "en plein air". He had several shelters built on the grounds at the best views so he could paint in all weather.
Posted by DA Schuster Fine Art at 12:26 PM No comments: 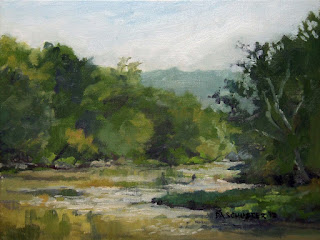 I painted with Chuck Marshall at one of his favorite spots on the Little Miami River on Friday. While I painted, Chuck did two small studies, one of which he put up on his Facebook page.
Posted by DA Schuster Fine Art at 9:22 PM No comments: 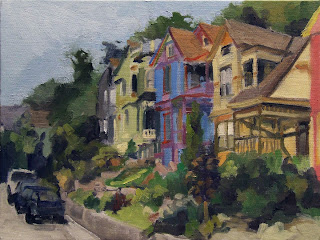 Last Thursday SWOPA went down to the East side of Cincinnati, near where the city was founded. The Columbia area of the city, near Lunken Airport, was founded by Benjamin Stites in November 1788, predating Losantiville (later Cincinnati) by a month. Transportation has always been important in the area: a landing for flatboats, construction sites for many steamboats, route for steam trains and then Lunken, built on Turkey Bottoms and the first commercial airport for Cincinnati.

The pictured houses were built in the late 19th Century on Tusculum Street. Tusculum leads up the hill to Alms Park on the summit. Location of previous SWOPA plein air trips.
Posted by DA Schuster Fine Art at 7:39 PM No comments: