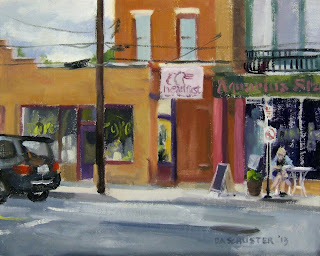 South West Ohio Plein Air group was down in the Clifton neighborhood of Cincinnati last Thursday. A heavy urban vibe in this area that's centered on the streets of Clifton and Ludlow Avenues, it doesn't have a square like some of the city neighborhoods.

I didn't want to just paint anything, so I set up across the street from the alley leading to the hair salon that I've been frequenting for the last 37 years. This piece can be currently be seen at Head First, 329 1/2 Ludlow Avenue.
Posted by DA Schuster Fine Art at 7:23 PM