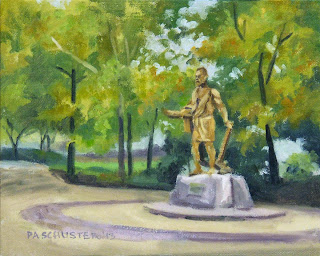 I only got drenched while scoping out painting locations last Thursday at Sawyer Point. Started in the pouring rain while sheltering under the arches of the Purple People Bridge, this statue is of the namesake for the Society of Cincinnati (after which the city is named). The famous Roman general refused to govern after leading the country's armies to victory. Thus the bundled axe and staves (symbol of the Consul's authority) and the plow (he went back to his estates).
Posted by DA Schuster Fine Art at 5:04 PM