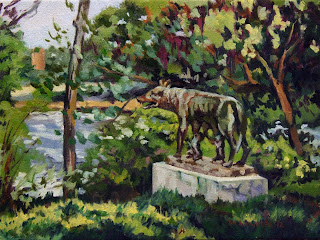 The last April plein air date with SWOPA was at Eden Park in Cincinnati. Located in one the park's river overlooks is this copy of the "Capitoline Wolf", 12" x 16", Oil on Canvas. A gift of the city of Rome to the citizens of Cincinnati (due to our shared legend of being built on "seven hills"), this bronze is a replica of the statue of Romulus and Remus being suckled by a she-wolf.

The twin boys being the central characters of Rome's foundation myth. Their mother was Rhea Silvia, forced to become a Vestal Virgin, sworn to chastity, she conceived the twins by the god Mars. Once born, their power hungry uncle, Amulius, had them abandoned to die in the river Tiber. They were saved by a series of miraculous interventions, including the motherly attentions of the she-wolf. The twins, still ignorant of their true origins, were natural leaders and acquired many followers. When they discovered the truth of their birth, they killed Amulius and restored their mother's husband, Numitor, to his throne. Rather than wait to inherit their native city they chose to found a new city– Rome. For more info see: http://en.wikipedia.org/wiki/Romulus_and_Remus
Posted by DA Schuster Fine Art at 3:11 PM